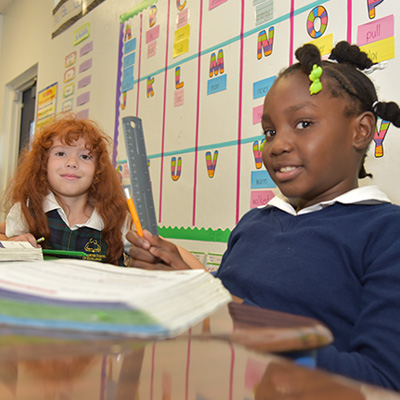 Students will take pride in their school and will respect the dedicated teachers and staff who commit their lives to education.

The Charter Schools of Excellence™ are all accredited by the Southern Association of Colleges and Schools Council on Accreditation and School Improvement (SACS CASI). CSE became accredited as a district of schools in 2010.

The original Charter School of Excellence in Fort Lauderdale is one of the highest performing schools in the state. View the school accountability report here.

The Charter School of Excellence was named a National Blue Ribbon School by the U.S. Department of Education in 2008. Founded in 1982, the National Blue Ribbon Schools Program recognizes public and private elementary, middle, and high schools where students perform at very high levels or where significant improvements are being made in students' academic achievement.

In 2009, The Charter School of Excellence received an EPIC Gold Award from New Leaders for New Schools for outstanding work in helping to raise academic achievement among students. EPIC was designed to identify schools driving the highest student achievement gains within a national consortium of over 380 charter schools.

"We will lead the Florida public schools in the standard for educational quality. The core values of honesty, respect, tolerance, fairness, self-discipline, integrity, responsibility, citizenship, work ethic, and trust is the foundation upon which our school is built."